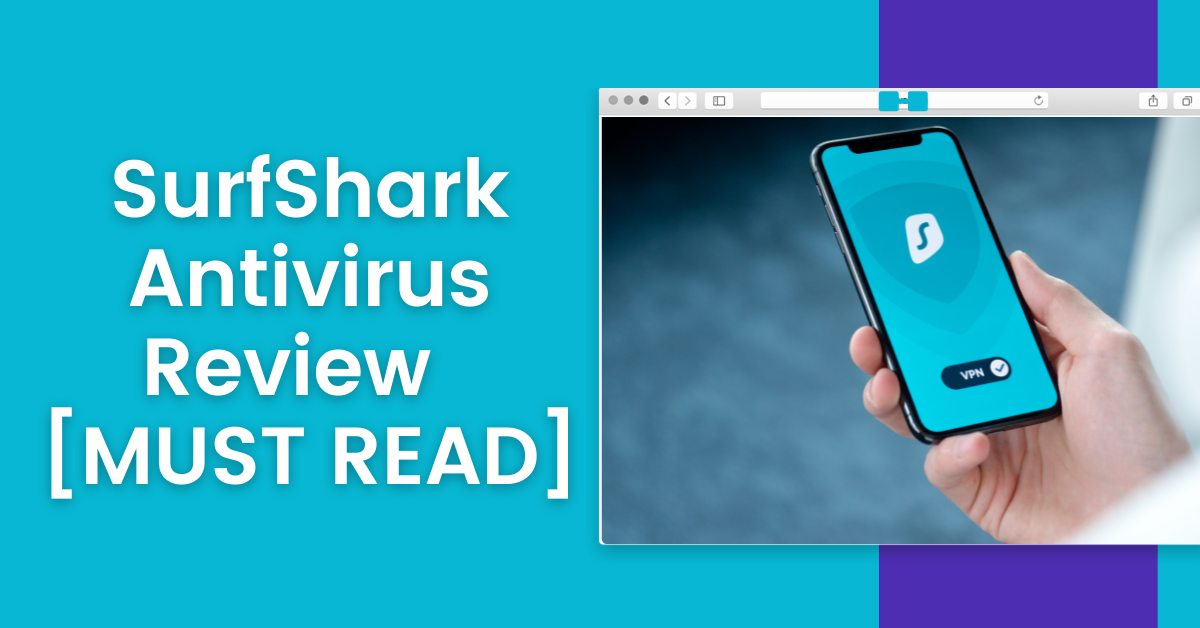 In this post, we will show you the Surfshark Antivirus review. Surfshark now includes an antivirus program in its new Surfshark One package; that’s pretty exciting news for Surfshark VPN users knowing that you don’t have to subscribe to a standalone antivirus package.

Hang in there with me as I give you a complete review of the new Surfshark Antivirus package, revealing some of its essential features you might have to watch out for.

Surfshark includes an antivirus program in its package for comprehensive cybersecurity protection. While Surfshark VPN protects your data and privacy, its Antivirus program keeps your devices safe from malware invasions like viruses, trojans, spyware, ransomware, etc.

Surfshark Antivirus is designed to protect you in real-time by continually monitoring your files and apps for malware. Additionally, its flexibility allows you to exclude some files and folders from scanning.

Overall, Surfshark Antivirus is a lightweight and robust antivirus that is fast and ultra easy to use. It comes with Surfshark One, a cybersecurity suite that includes a VPN, a private search engine, and a data breach monitoring tool.

How Does Surfshark Antivirus Work?

It also prevents malware from running automatically on your devices by continually scanning your device, inbound, and outbound data traffic in real-time for malicious codes.

A powerful and speedy antivirus engine for Windows and Android 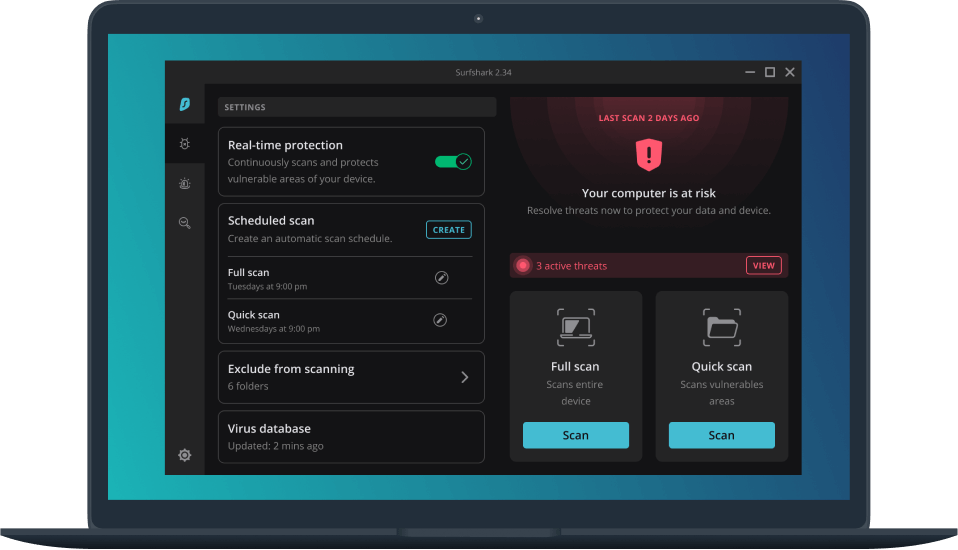 Surfshark uses heuristic detection techniques to detect and eliminate continually changing polymorphic antiviruses. For malware that might want to install automatically, Surfshark blocks such from happening by continually scanning your inbound data traffic in real-time.

Surfshark’s antivirus engine offers you flexible scanning options, which include Full or Quick system scans. In addition, you can also use its drag-and-drop feature, which is one of a kind, to include or exclude one or more folders from antivirus scanning. 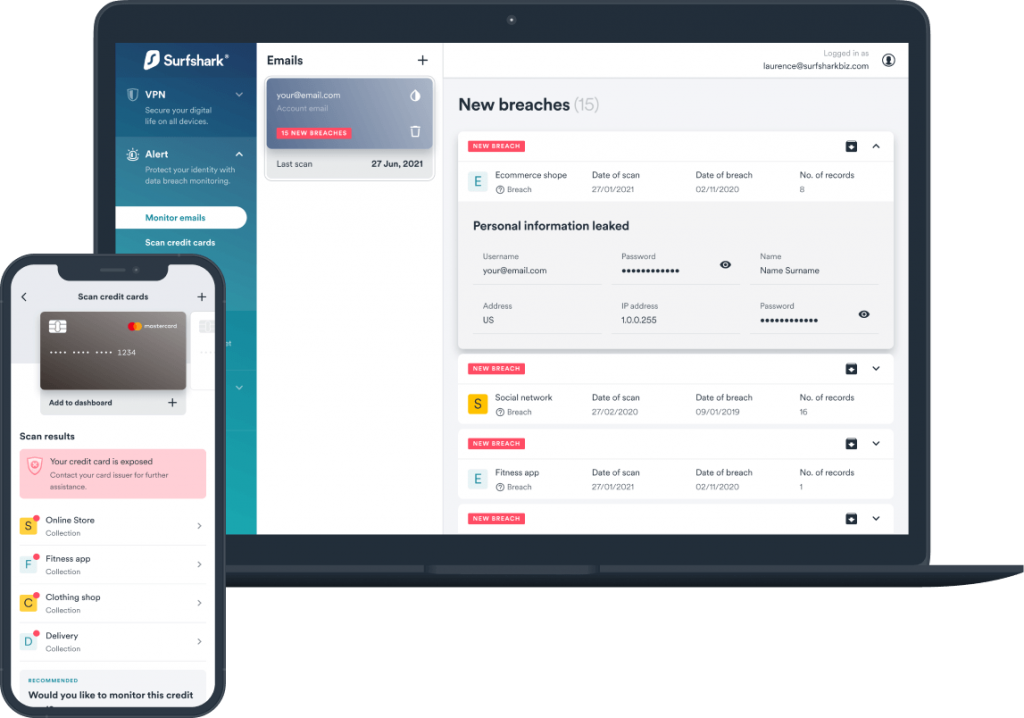 Surfshark Alert is built to monitor your personal data online and alert you if any of your information appears in data breaches.

To protect you from data breaches, Surfshark Alerts monitor the web by continually scanning the web for leaked data from your device, which can include your email addresses, credit card details, Social Security Number, and other Personally-Identifying Information, etc., and alerts you by sending you reports each time there’s a data breach affecting you.

Surfshark Search is Surfshark’s private search engine that protects you from trackers and cookies collectors. It is light, private, ad-free, and it displays only organic traffic.

For a subscription package of $1.49 per month, you can enjoy protection for five devices, including PCs and Android. Therefore, you do not have to worry about multiple subscriptions for multiple devices or family members; bring them under the Surfshark Antivirus cover.

Surfshark Antivirus scans devices faster than most top antiviruses I have tested; this feature is due to its lightweight and speedy antivirus engine, which uses minimal system resources.

The quick scan I performed was just too fast, finishing within 5 minutes, while the full system scan took me less than 30 minutes to complete, and thanks to Surfshark Antivirus subscription, five device protection, you can scan not just one device, but up to 5 at once!

Its drag-and-drop feature is also an impressive feature that makes it easy to customize scans by choosing what files and folders to scan or not. In addition, you can perform scheduled full or quick system scans – so you can scan your devices when it’s comfortable for you.

During the Surfshark Antivirus Review, we tested it.

Surfshark’s Real time protection continually scans all inbound and outbound data traffic in real-time for malicious codes. This feature works like a Firewall to screen out all malicious web data traffic that can infect your devices with malware.

Whether you’re downloading, browsing the net, or installing an app, Surfshark’s real time protection gets you covered malware infection in real-time.

How To Install Surfshark Antivirus On Windows PC 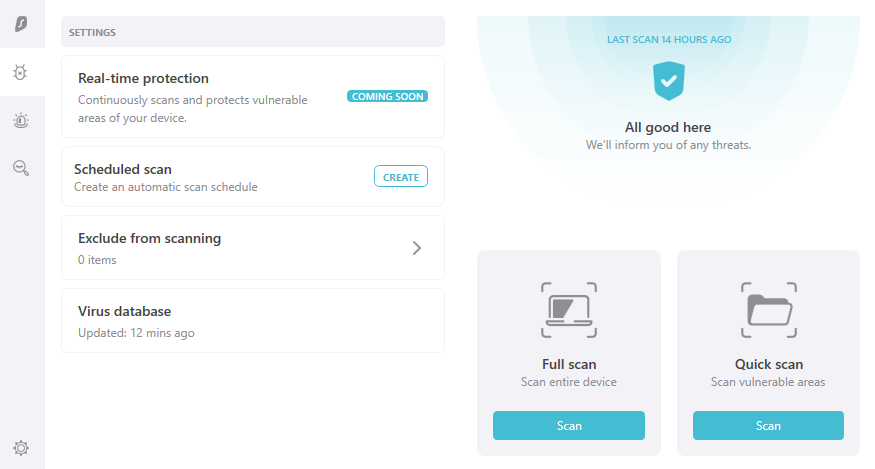 Surfshark is available for Windows 10 and other newer versions; however, we believe that in no time, we will have Surfshark Antivirus for Mac OS, Linux, and other major Operating Systems.

How To install and use Surfshark Antivirus on Windows PCs:

It will protect your Android devices from auto-install malware; it will also scan your files and apps in real-time for malware.

Malware is designed to take control of users’ devices by bypassing the permission protocol to gain access and control; therefore, Surfshark Antivirus will protect your Android devices from common malware like:

How To Install And Use Surfshark Antivirus On Android Devices:

At the moment, Surfshark Antivirus has a $2.49 per month starting price.

This is quite affordable, given that one subscription covers five devices simultaneously, and you can use Surfshark’s VPN to stream Netflix, BBC iPlayer, HBO Max, Disney+, Spotify, etc. Its servers are also optimized for high-speed torrenting and other purposes.

Surfshark Antivirus is ultra-easy to use; it has a friendly and simplistic user interface that is less cluttered for easy navigation. Surfshark’s features are well-arranged as buttons for easy navigation; hence users can easily access them.

For ease of use, I give Surfshark Antivirus a 5 over 5 rating.

There are Surfshark apps for macOS, Android, and Windows devices. These apps have an intuitive user interface with icons and tabs well-arranged for easy navigation. You can easily navigate between its menus without any help or guidance.

Again, for apps, I give Surfshark a 5 over 5 rating.

Surfshark is relatively affordable. Apart from providing both privacy and security features in their bundled offer, their 12 months plan cost $2.49 per month, which makes it one of the most affordable antivirus software in the market.

I will rate Surfshark’s customer support excellent for its fast response. Also, I am well-pleased with Surfshark’s Live Chat and support team for fast, professional, and friendly responses to issues and inquiries.

For customer support, Surfshark is rated 5 over 5.

Does Surfshark Have Antivirus Software?

Is Surfshark One An Antivirus?

Is Surfshark A Chinese Company?

No, Surfshark is not a Chinese company. Surfshark is owned by Surfshark Ltd, a VPN service provider based in the British Virgin Islands. Thankfully, Surfshark has VPN servers that work well for unblocking websites restricted by the Chinese firewall.

Is Surfshark One A Good Security Bundle?

Surfshark One is an excellent cybersecurity bundle, perhaps the best so far. For $2.49 per month, you enjoy premium quality VPN and antivirus bundled together in addition to robust cybersecurity features and privacy tools to make the internet a safer place.

Yes, the Surfshark Antivirus program works well on Mac PCs. You can download and install Surfshark for Mac OS and start enjoying robust antivirus protection for your device.

What Is Surfshark VPN?

Surfshark VPN is a virtual private network that can hide your IP address. This helps to keep your privacy safe and encrypted while you browse the web.

With a VPN plan, you are provided with unlimited simultaneous connections to unblock geo-restricted streaming services such as Apple TV, Amazon Prime Video, Hulu, etc.

By using Surfshark VPN, you can protect yourself from intrusive cyber-attacks and data theft.
Surfshark VPN also offers a number of other features that make it a powerful tool for online privacy.

One of the best things about Surfshark VPN is that it is extremely versatile and it has a fast connection speed. You can use it to protect your privacy while you browse the web, stay anonymous while using public Wi-Fi, and protect your data while streaming music and video.

Additionally, Surfshark VPN has a strict no logs policy, which means that your browsing history and personal information will never be stored or monitored. Also, you can check out our Surfshark VPN review for more information about its VPN service.

Wrapping Up The Surfshark Antivirus Review

Surfshark Antivirus is a lightweight and robust antivirus that offers you flexible scanning options, including full or quick system scans, and is included with Surfshark One, a cybersecurity suite that also includes a VPN, a private search engine, and a data breach monitoring tool.

Surfshark now strengthens your cybersecurity by keeping your devices safe with its new Surfshark One Package while also protecting your online data and identity with Surfshark VPN.

With a starting price of $2.49 per month, I will say Surfshark Antivirus is quite affordable, causing no stress on your pockets while you enjoy high-level protection for both executable and non-executable files, documents, and folders in real-time.

Overall, this new cybersecurity tool is recommended for its effective malware protection, fast and flexible system scans, and multiple device protection at a very affordable rate.

If you’re a security-minded user who wants to keep your devices safe from malware and cybercriminals, then Surfshark Antivirus is the right choice for you. We hope you enjoyed this Surfshark Antivirus review. If you have any questions, feel free to reach out via email or leave a comment below.