Top 5 Cybersecurity Threats That eCommerce Websites Should Watch Out For

In this post, I will show you the top 5 cybersecurity threats that eCommerce websites should watch out for.

The e-commerce industry has always been a bonne bouche for spammers, hackers, and cybercriminals of all shades. With intruders’ methods becoming more complicated, the consequences more destructive, and the number of companies affected growing at an exponential rate, online businesses have to think through actionable strategies in order to strengthen their security maturity and protect their assets against cyber threats.

From data leaks and financial charges to disrupted customer trust and compromised trade secrets – the slightest security vulnerability can lead to immense damage.

Understanding your enemies is the first step toward building an unbreachable wall around your business. As such, knowing the major security threats that e-commerce websites face will assist entrepreneurs in developing powerful strategies to repulse an assault.

Top 5 Cybersecurity Threats That eCommerce Websites Should Watch Out For

Firstly, among the top 5 cybersecurity threats that eCommerce websites owners encounter is DDoS.

DDoS is one of the oldest tricks that is still a concern for IT departments. Distributed Denial of Service attacks are considered “old-fashioned” but the threat is often underestimated.

In a nutshell, DDoS is a malicious attempt to disrupt servers by overwhelming the targets with tons of traffic so that the servers are unable to serve legitimate requests. Hackers leverage such specific apps as LOIC (a network stress-testing tool that is used to launch a DDoS attack from a web browser) to overload targets with UDP, TCP, and HTTP packets.

For e-commerce businesses, a successful attempt may result in millions in lost revenue, apart from significant reputational damage caused by ongoing downtime and ruined favorable image.

It is worth mentioning that DDoS attacks can serve as a shield for serious data thefts. While all the efforts of an IT department are focusing on handling the traffic flood, cybercriminals can leverage a known vulnerability to steal your data on the sly. According to a Kaspersky research, 26% of DDoS attacks lead to data loss.

The most common DDoS protection techniques include:

Among our list of cybersecurity threats that eCommerce websites should watch out for is ransomware. Ransomware is a form of financial fraud that for some criminal elements, can become a full-scale business model. Due to the fact that you don’t have to possess solid coding skills to execute this attack, the number of e-commerce businesses, as well as financial organizations of all shades, affected by the threat is increasing.

With ransomware, a target basically gets an email with a malicious link embedded or a file attached. Once the victim clicks to the link that leads to an infected website or downloads the file, a cryptoworm is spreading like wildfire, encrypts essential data (photos, documents, databases) and, in some cases, the entire system. Cybercriminals demand a ransom to restore access upon payment.  Since the ransom is usually asked in Bitcoins, the hackers’ personalities are difficult to identify.

There are only two ways for this kind of malicious software to penetrate the system:

For example, the WannaCry attacks turned out to be a global pandemic in 2017. The virus has affected lots of e-commerce websites, many of which have decided to pay a ransom to the cybercriminals to get a decryption key. Below you can see the WannaCry warning message that has appeared on a plethora of screens across the world. 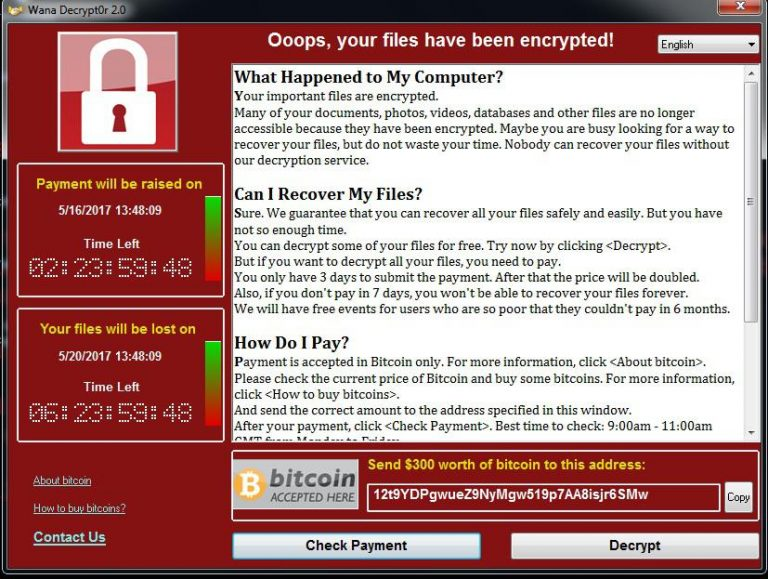 Unfortunately, in most cases, once the ransomware has been released into your device there is little you can do unless you have ongoing security software in place or backup. Some companies choose to pay a ransom to regain access to the locked files. However, this does not guarantee that the criminals will give you the key as promised. Besides, paying a ransom doesn’t protect your site against repetitive attacks with the demand being higher than the previous one. Data recovery is both a sophisticated and expensive process that, in some cases, requires the help of experienced professionals.

A piece of good news is that there are some ways for e-commerce business owners to prevent this form of cyber threat:

Preventing SQL-injections should be an inherent part of your security checklist. With this form of attack, hackers leverage loopholes in the back-end to insert malicious code in a query and make it executed. As a result of unsanitized user input, a hacker gains full control over the infected store. This allows them to modify the content of the store, delete the entire database, steal credit card details, expose admin credentials to open the door for further attacks.

READ ALSO: Could A Keylogger Be Spying On You? – All You Need To Know

In fact, the malicious query has only three rooms to reach your website database:

So, in order to contradict SQL-injections, you need to close the doors for those three routes. Keep your system updated, install proper security patches, and carry out security checks regularly with automated testing tools to identify and correct these bugs ASAP. Thus, you may need the help of experienced developers who know how to make your website secure.

Malicious bots possess a serious concern for e-commerce business owners. This self-propagating software is developed to scan websites for security vulnerabilities and leverage them to carry out fraudulent activity and report this information to the botmaster. As such, bad bots can steal your pricing data, scrape your inventories, spam, perform checkout fraud, overload a server infrastructure, and slow down the website speed. Therefore, protecting your business against bad bots should be an integral part of your security checklist.

However, bot activity is not easy to identify. The latest generation is able to mimic human behavior in a very natural way so that it is hard to distinguish a bot from a real user.

Make sure you run to cover by implementing the following strategies:

Protecting your website against Cross-Site Scripting is essential. Even Google has launched the reward program where it promises to pay $10, 000 to the developer or cybersecurity expert who can detect an XSS vulnerability in its network.

READ ALSO: How To Secure And Protect A Website [We Asked 38 Experts]

XSS targets authentication information: names, tokens, passwords, email addresses. Once a cybercriminal gains access to this data, they can exploit the user’s account whatever they want. For example, if a hacker gets to know, say, the user’s credit card number connected to the store, they can make use of this data to make fraudulent orders or change the shipping destination.

Apart from these top 5 cybersecurity threats that eCommerce websites owners encounter, there are others as well. With the rise of artificial intelligence and modern technologies, attacks on online stores and websites are becoming more and more sophisticated.

Some experts believe that we are on the threshold of the cyber arms race. In order to build an impenetrable wall around the business and win in this wrecking war, entrepreneurs have to know their enemies and invest in this scope as much as they spend on the other fields.

Note: This is a guest post by Alex Husar.

Alex Husar is the CTO at Onilab with 8+ years of experience in Magento PWA development and Salesforce. He graduated from the Czech Technical University and obtained a bachelor’s degree in Computer Software Engineering. Alex’s expertise includes both full-stack dev skills and a strong ability to provide project-critical guidance to the whole team.

Daniel Segunhttp://www.techsegun.com/
Daniel Segun is the Founder and CEO of SecureBlitz Cybersecurity Media, with a background in Computer Science and Digital Marketing. When not writing, he's probably busy designing graphics or developing websites.
RELATED ARTICLES
CyberBust